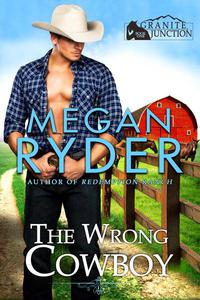 The sexy rancher is clearly not interested in long-term. In fact, he’s not interested, period. But Emma is determined to change his mind until his cousin, Gabe Buchanan, puts a definite crimp in her perfect plans.

Gabe has come to help his cousin with work around the ranch while struggling to unravel his next book plot. The last thing he expected to find was literary inspiration in the curvaceous cowgirl pining over his cousin. Determined to prove he is the right match for her, he devises a plan to win Emma’s heart.

As much as Emma wants her childhood crush to finally take notice, she can’t help but be intrigued by the sizzling hot and funny Gabe. When he asks her out, she can’t say no. Besides, it’s just a friendly dinner. No big deal. Yet when the lines between casual and interested blur, neither can deny the chemistry between them.

Can Gabe fill every box on Emma’s checklist and give her what she needs the most? His heart and a future together?

Granite Junction is a spin-off from the Redemption Ranch series, with some of your favorite characters returning and making guest appearances, while others find their happy ever afters!

He prefers older, sophisticated women who know what they want. Or at least he did, until he begins to see his assistant in a different light.

But she’s done with her stupid crush on her boss. Done, done, done!

Finn Casella was always the shy, reticent one in the midst of the lively, outgoing Casella cousins. When he was young, he liked books and writing more than he liked people. Now a successful independent bookstore owner in the heart of New York City, he’s settling into his life and wants to get back to his unfinished novel.

Millie Morrison worked her way through a college degree in literature and a Masters’ Degree in business by supporting herself with her job in the bookstore. She’s generous and sensitive to her friends and customers. But each overture to her boss has been met with cool professionalism. Well, she’s overcome harder things in her life than unrequited love.

Can these two people, with more in common than they realize, forge something new out of his emotional baggage and her starry-eyed optimism? Some interesting plot twists will keep you guessing and rooting for them to make it—together.

Look for cameo appearances by the O’Neils, who own Bailey’s Irish Pub on MacDougal Street.

When a Navy SEAL runs into an obstacle, he climbs over it, under it, around it, or destroys it. So what if it’s a woman?

Master Chief Benjamin Blackwell has it all. Adventure, good looks, skills, and women. His life is perfect and he has no intention of changing a thing. Until her.

Holly Maxwell is a sexy woman unlike anyone he’s met before. A widow for ten years, she’s happy with her life even with the trials of raising a pre-teen daughter, and being the only girl in a nosy, boisterous family of Coronado cops.

But what makes her so inexplicable to this Navy SEAL is her total lack of interest in him.